FROM STORM AND SHADOW (STORMFAE #1) 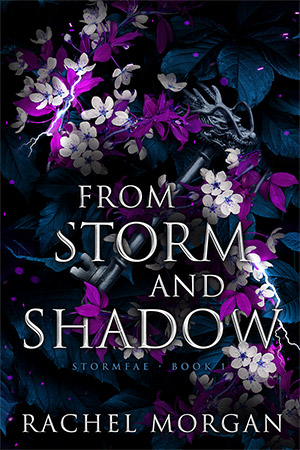 As of Oct 2022, the From Storm and Shadow ebook is enrolled in Kindle Unlimited and is therefore exclusive to Amazon. The paperback and hardback are still available widely.

Return to a beloved fantasy realm with a brand new series set in Rachel Morgan’s bestselling World of Guardians.

When Silver’s parents are murdered in front of her by the people she’s trusted for years, she flees the fae realm and begins a new life pretending to be human.

More than two years later, she’s almost allowed herself to believe she’s safe—until the night someone from the Guild shows up.

He’s on the run now as well, after discovering the same secret that led to Silver’s parents’ deaths. Or so he says.

The forest they grew up in has become a dangerous place, crawling with fae monsters, and Ash claims he needs Silver’s help. The discovery her parents made years ago could be the only thing to save their home.

Silver knows Ash is only using her—he’s a guardian, after all, and they’re the ones who took everything from her—but she can’t turn her back on the home she still loves.

And so she forms a fragile truce with the boy who broke her heart. She steps back into the world she swore never to return to and sets out on a dangerous path to unlock the secrets of the past.

But neither Silver nor Ash are prepared for the true horror of what they will find lurking in the shadows of Stormsdrift.